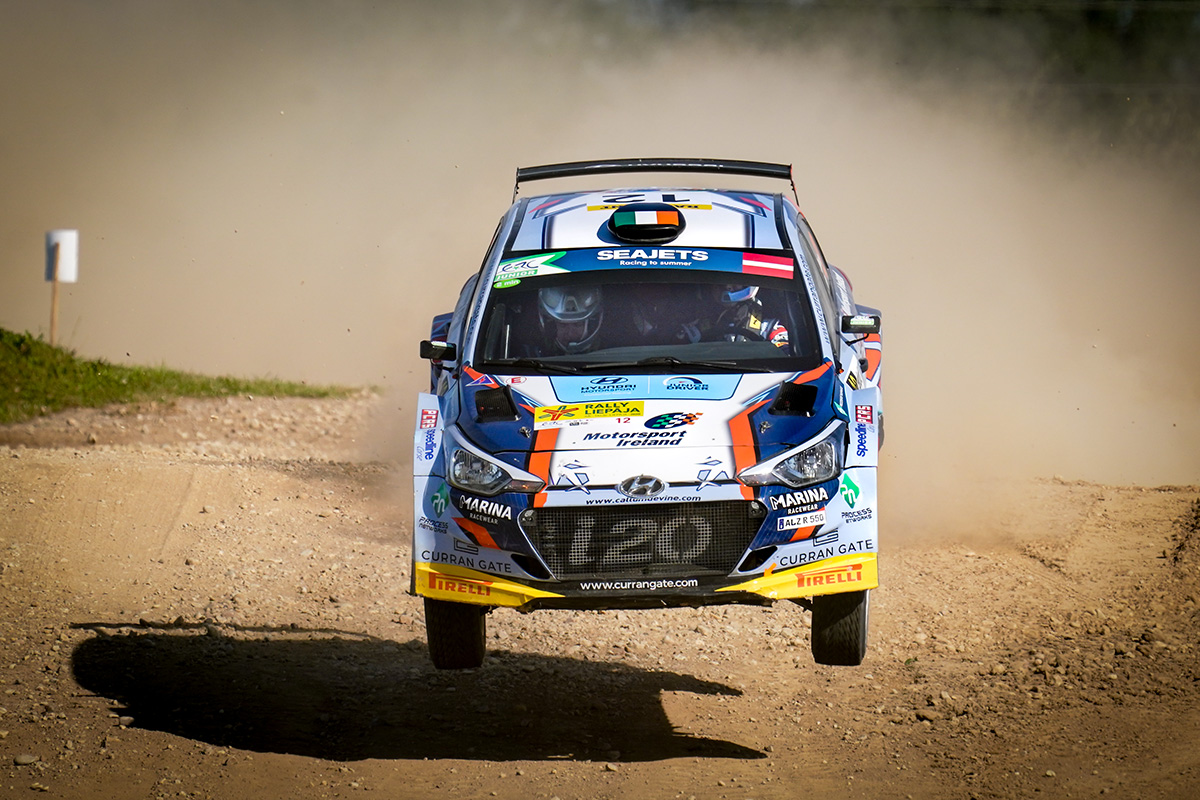 Callum Devine’s FIA European Rally Championship learning year continues to dish out harsh lessons as he left round 2, Rally Liepāja, without a finish. The current Motorsport Ireland International Driver of the Year was out to make amends following an early retirement on the opening round in Italy late last month.

Despite a hectic start to the event which saw Callum miss pre event shakedown and qualifying as an issue with his Hyundai i20 R5 was fixed thanks to a sterling effort from the PCRS mechanics, the Derry driver was beginning to grow in confidence on his first loose surface event at this level. Steady driving saw Hyundai Customer Racing Junior Driver Callum and co-driver Brian Hoy work their way into the top 10 early on day 2 and up to 4th place among the ERC1 Junior crews. It all came to an end on stage 6 for the Motorsport Ireland Rally Academy entered crew however, as Devine recalls; “We were actually just starting to get into it and growing in confidence. As I mentioned before the event, it’s not a place you want to get things wrong as the speeds are so high. Unfortunately, that’s exactly what happened. On Stage 6 we carried a bit too much speed into a fast right hander and caught the undergrowth on the outside of the corner, sending us into a roll and out of the event. Myself and Brian are OK, just a little sore and thankfully all the safety equipment stood up to the accident, the Hyundai is a strong car. I’m just so disappointed for all the team who worked so hard over the last month. To have taken just 1 point from the opening pair of rallies is sickening and doesn’t reflect all the work we’ve put in, hopefully we can put it right before the end of the season.”

Devine’s accident casts some doubt over his participation in the next round of the championship, Rallye Azores in mid-September. The PCRS team will assess the damage to the car in the coming days but even if it can be sorted in time to make the boat to travel to the Azores, presently Portugal and its associated territories aren’t on the Irish “green list” for travel and this could pose an issue for Callum and the team as Devine explains; “If the car can be sorted for Azores, travel restrictions could be an issue. As it stands, not only myself and Brian, but also all the mechanics would have to isolate for 2 weeks after returning to Ireland after the rally. I work between events so to isolate for 2 weeks upon return would be a big problem. Obviously government guidelines are changing all the time so we’ll just have to wait and see. It’s worth pointing out this isn’t just a problem for us, it’s a problem for all competitors and teams in the championship.”

While Rallye Azores may be in doubt, one thing that isn’t in doubt is Devine’s commitment to the Motorsport Ireland Rally Academy. “I realise how lucky I am to have this opportunity and I’m ready to knuckle down and refocus in preparation for our next ERC event” said Devine. Following Rallye Azores, the remaining rounds of the 2020 ERC will take place in Cyprus, Hungary and the Canary Islands. To keep up to date with Callum between events, make sure to follow him on Facebook, Twitter and Instagram.