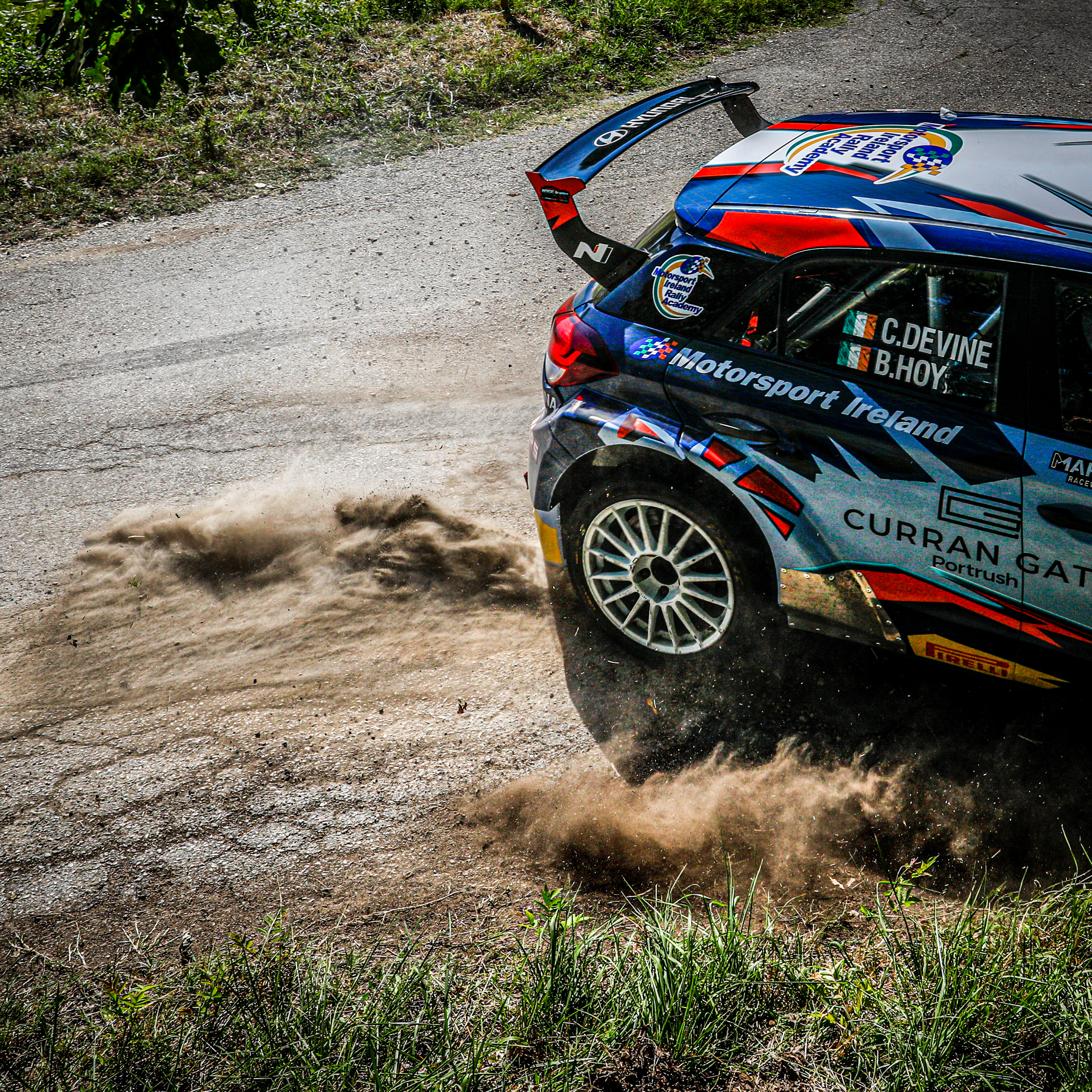 Callum Devine’s 2020 European Rally Championship campaign got off to a frustrating start with an early retirement from Rally di Roma Capitale. Devine and co-driver Brian Hoy had shown promise early on with 8th fastest time in Friday qualifying as well as being the quickest Hyundai i20 R5, outpacing works Hyundai driver Craig Breen and fellow Hyundai Motorsport Customer Racing Junior Driver Grégoire Munster. On Saturday morning, Devine was running on the fringes of the top 10 and despite not being fully committed to his pacenotes, was outpacing Hyundai Rally Team Italia driver, and former Italian Champion, Umberto Scandola. That was until stage 3, as Callum takes up the story.

“We were slightly disappointed with our start and knew we had much more in us”, said Callum after the event. “We were just starting to get into a flow on stage 3 and building up speed. To try and be on the pace on these events you have to cut where you can and carry as much speed as possible. There was a fast corner through a dip which we cut and there was a bang as we went over some stones. We didn’t think much of it as it’s not unusual to hear noises like that while cutting a corner. But slowly the engine began to lose oil and then the oil pressure  light came on 200 metres from  the finish of the stage. We stopped the engine and coasted over the finish but that was game over. It turned out that in the compression a stone punched through the sumpguard and holed the sump, causing the engine to lose all its oil. I could probably take that corner 100 times and it would never happen again, it was just a freak thing but when you’re trying that card is always in the deck I suppose. I’m really disappointed for the whole team after all the effort that went into the weekend, I know we would have been in contention for a decent result.”

The Motorsport Ireland Rally Academy entered car will be fixed before Devine’s next European Rally Championship event in Latvia in mid-August and Devine has another chance to show his speed on Italian tarmac this weekend at Rally di Alba, where he will pilot a Hyundai i20 R5 run by the Italian HMI Team. “The opportunity to do Alba came about through Andrew Johns in Hyundai Motorsport Customer Racing and I’m really looking forward to the event and very thankful for the opportunity”, said Devine. “There’s over 30 R5 cars on the entry list and we’ll have a great benchmark with Craig Breen, Dani Sordo, Luca Rossetti, Ole Christian Veiby and Jari Huttunen all entered in Hyundai R5 cars. Josh McErlean and Josh Moffett are also entered and we are all seeded together so that should be good fun too, it’ll be nice to do a one off rally and not have to worry about championship implications and in lots of ways, it’s the perfect thing to do after what happened at the weekend.”

Rally di Alba will take place on Sunday August 2nd with the crews taking on 3 stages repeated 3 times with the total competitive mileage of the event coming in at just over 100km. Following the event Callum and Brian will return home to prepare for Rally Liepāja, the second round of the ERC. “Latvia is a loose surface event and if the year had gone to plan, I would have liked a little more loose surface experience in the Hyundai before this stage of the year but it is what it is”, smiled Devine. “After a non-score in Rome and the championship having less rounds this year, we’ll need to take points away from Latvia.” To keep up to date with Callum throughout the second week of his Italian adventure, make sure to follow him on Facebook, Twitter and Instagram